You are here: Home / Articles / Cowabunga! Implementing Lean at a Surfing School

Lean is difficult for many companies to grasp at first, often due to the cultural shift. If the organization’s people are used to a more laid-back, “looser” style of operations, the standards, metrics and procedures associated with lean may seem overwhelming and lead to resistance. Pacific Surf School of San Diego, Cali. was no exception to this all-too-common resistance. Here’s Sammy Obara on how he managed to break through this resistance and save the school from imminent closure.

I understand that you helped a surfing school improve its operations by implementing standard work. What was it about the surfers’ culture that made the transformation difficult?

I hope I am not stereotyping here but surfers in general, at least the ones I’ve interacted with, are not typically the biggest fans of any managerial or regimented structure. For example, all surf instructors included in our lean effort refused to wear watches. We had some lively debate about the reasons why wearing a watch would help them stick to certain important class segments. One of them argued that he never had to wear a watch and that he always had a pretty good notion of time by looking at the position of the sun.

What was the True North of the transformation?

The owner of Pacific Surf School was considering closing down after a sharp decline in demand. He wanted to give it a last try but didn’t know how. The name of the game was how to save the school for at least another season.

What were the first things you attempted to standardize? 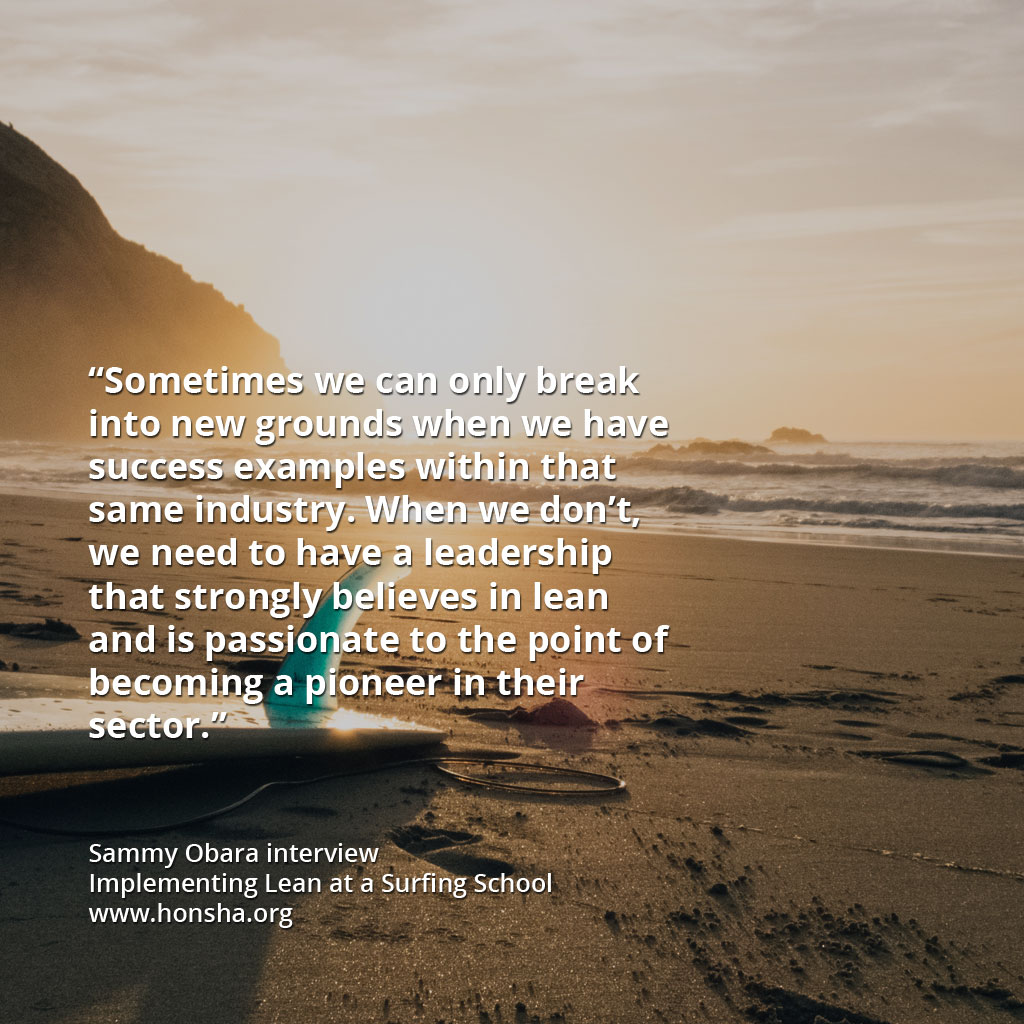 How did they respond to it? I’m guessing they didn’t exactly embrace it right away…

Not at all. They weren’t thrilled with it. Well, actually they hated it, to be honest. In every session the surfers were either tuned out or displayed confrontational behavior. They just couldn’t accept that lean was a better way to operate than the laidback culture they were all used to.

How did you manage to overcome that resistance?

I had to “pull the andon cord.” I noticed that the surfing instructors were much more engaged and interested when the owner of the school was sitting in on the sessions. So I stopped the meeting and training sessions and had a private dialogue with him. I told him what I was noticing and he promised to sit in all my sessions, being the first to arrive, last to leave, no interruptions. That alone sent the message to all the instructors that “this is important – let’s get onboard.” Pardon the pun.

From that point on, the apparent attitude was of a willing group. The growing actionable engagement only came after some timid implementation took place and the instructors realized how simple it all was. They fully bought into the idea once they noticed the benefits the kaizens were bringing to them and to the school.

What kind of benefits?

There were many, but the biggest benefit was an immediate increase in training capacity – not only were boards and wetsuits more available, but instructors were more available as well. Their availability was particularly crucial as they could use their idle time to clean and fix damaged boards, organize wetsuits for faster reuse, and, the most key initiative of them all, they had time to be on the boardwalk, inviting and distributing coupons to potential students.

What parallels did you notice between implementing lean in this surfing school versus more traditional environments, like a factory?

Many people claim that it is not as easy to implement lean in their unique industry, or in their unique culture, or in their unique uniqueness. The military sector says things are too regimented and not conducive to implementing lean. This surfing school said their culture was too loose and not conducive to implementing lean. Having implemented lean in these two opposite sides of the scale, I realize that certain things need to be believed to be seen, as says Darril Wilburn, my colleague who also had the surfing school experience. Sometimes we can only break into new grounds when we have success examples within that same industry. When we don’t, we need to have a leadership that strongly believes in lean and is passionate to the point of becoming a pioneer in their sector.

And there’s also the element of resistance. From my own experience in the lean world, most resistance stems from our human nature. It doesn’t matter much the industry you are in; we naturally resist change since it steals our comfort zone. I’ve seen exceptions in environments like pharmaceutical, airport security and the military, to name a few; but even in those areas, resistance resulted from old policies, bureaucratic structures, and factors beyond one’s scope of control – similar to the surfing school. In most cases I think resistance works in the same way everywhere. It is people-based, and if people understand the benefits and participate in the change, we can start resolving the resistance.

For more details on this lean transformation and other techniques Sammy Obara used to manage the resistance, stop by his learning session at the 2017 Lean Transformation Summit, to be held March 7-8, 2017 in Carlsbad, Cali. Learn more and register with our Early Discount discount at the summit webpage.